2. The Equivalent Lands and Fort Dummer

The “Equivalent Lands” covered most of today’s Putney, Dummerston and Brattleboro – about 44,000 acres. 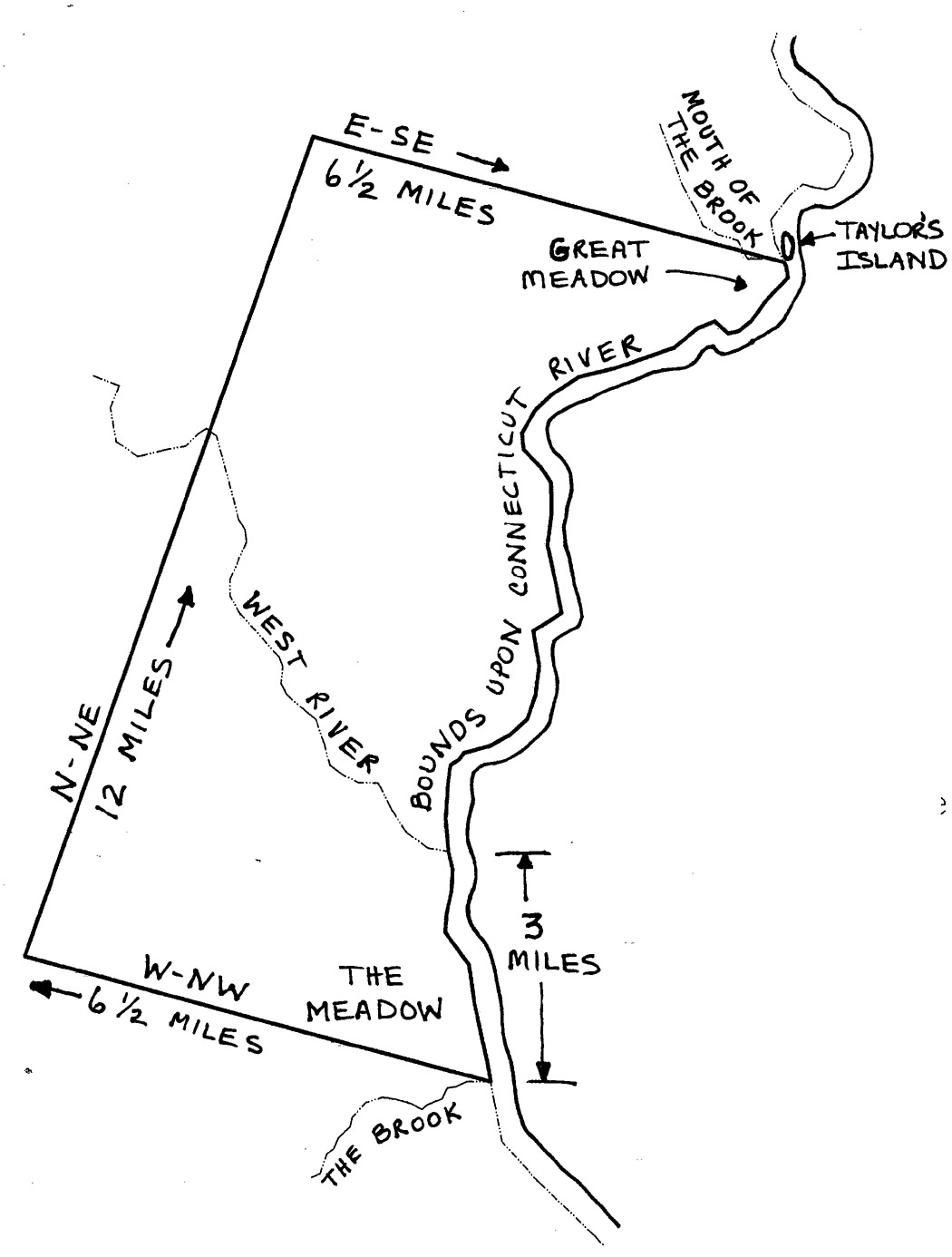 The “equivalents”,  which included two other tracts beside this one, were sold by Connecticut to raise money for Yale College, and the buyers in turn sold this 44,000 acre tract to four men including William Brattle.

The Equivalent Lands were never mapped as far as we know, but there is a written description in the Connecticut Archives.

The description records a twelve mile long tract of land starting “…at the northward end of the Great Meadow …“ (Putney) and then proceeding downstream to “…the mouth of the brook that emptieth itself unto Connecticut river at the lower end of the Meadow, about three miles southward of the West river…”

The description then follows general bearings to the west, north and east as shown on the sketch map which we have prepared for this publication.  The brook three miles below the West River is the stream we now call Broad Brook.

The map below, from Mary Cabot’s “Annals of Brattleboro”, depicts the area of the southern boundary of the Equivalent Lands. 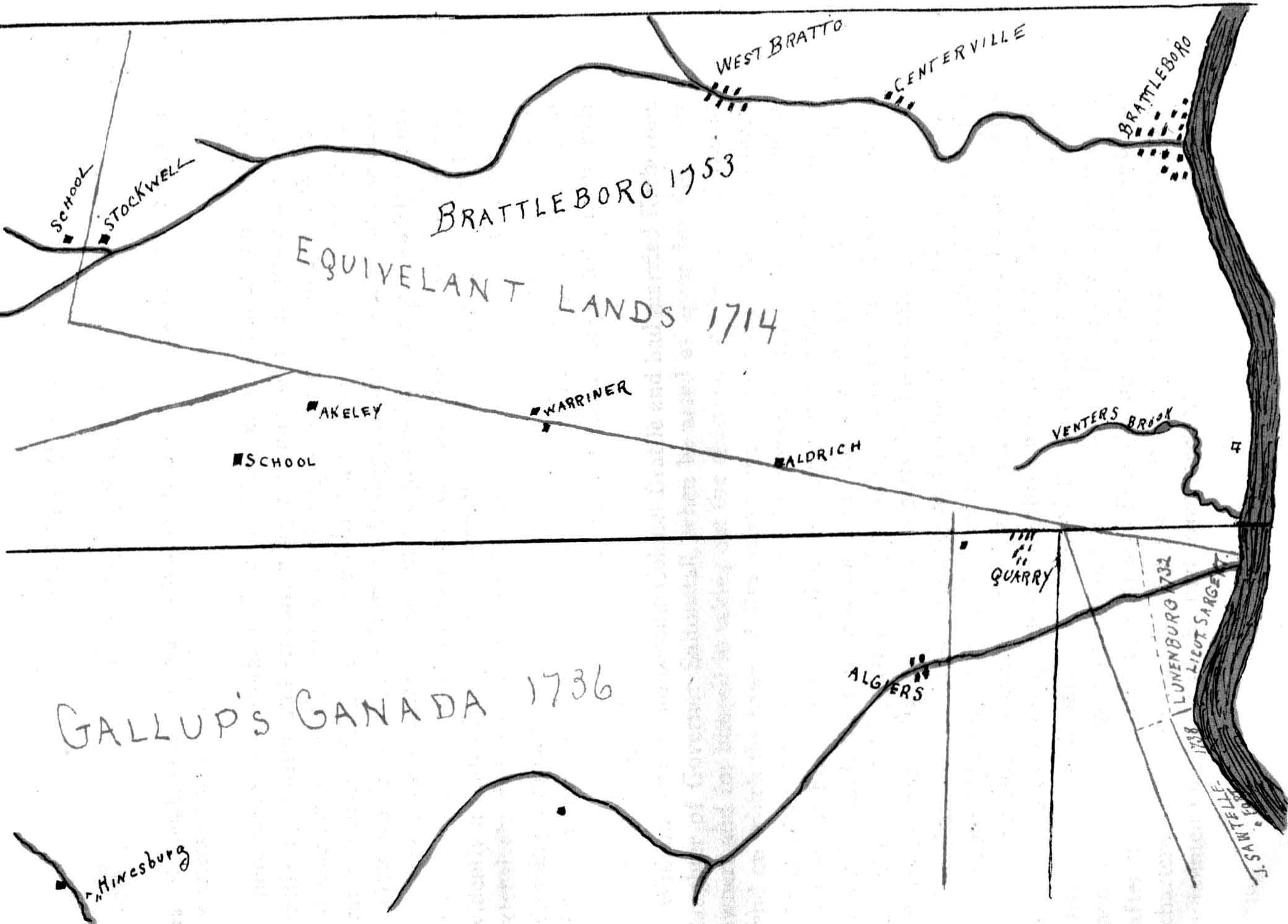 The horizontal line is the south line of Brattleboro, meeting the Connecticut River at Venters Brook.

The diagonal line is the south line of the Equivalent Lands, which meets the Connnecticut at Broad Brook. This line was also the north line of “Gallups Canada” as Guilford used to be called.  This unusually named town was created by Massachusetts in 1736 as a land grant to soldiers (Gallup and others) who went to Canada on an earlier military expedition.

The vertical line to the right of the quarry (lower right) is the present Guilford/Vernon town line. The map also shows two early private land grants in Vernon (which was then part of Northfield) along the river.

It is not known whether any Europeans lived in this area in the 1720s and 1730s, other than soldiers at Fort Dummer. The villages shown on this map are those of the 1920s when Cabot’s history was published.

The relative safety brought on by Fort Dummer encouraged more settlement, and in 1733 and 1734 the towns of Winchester, Swanzey and Keene were established along the desirable Ashuelot River in today’s New Hampshire (see Map 1). 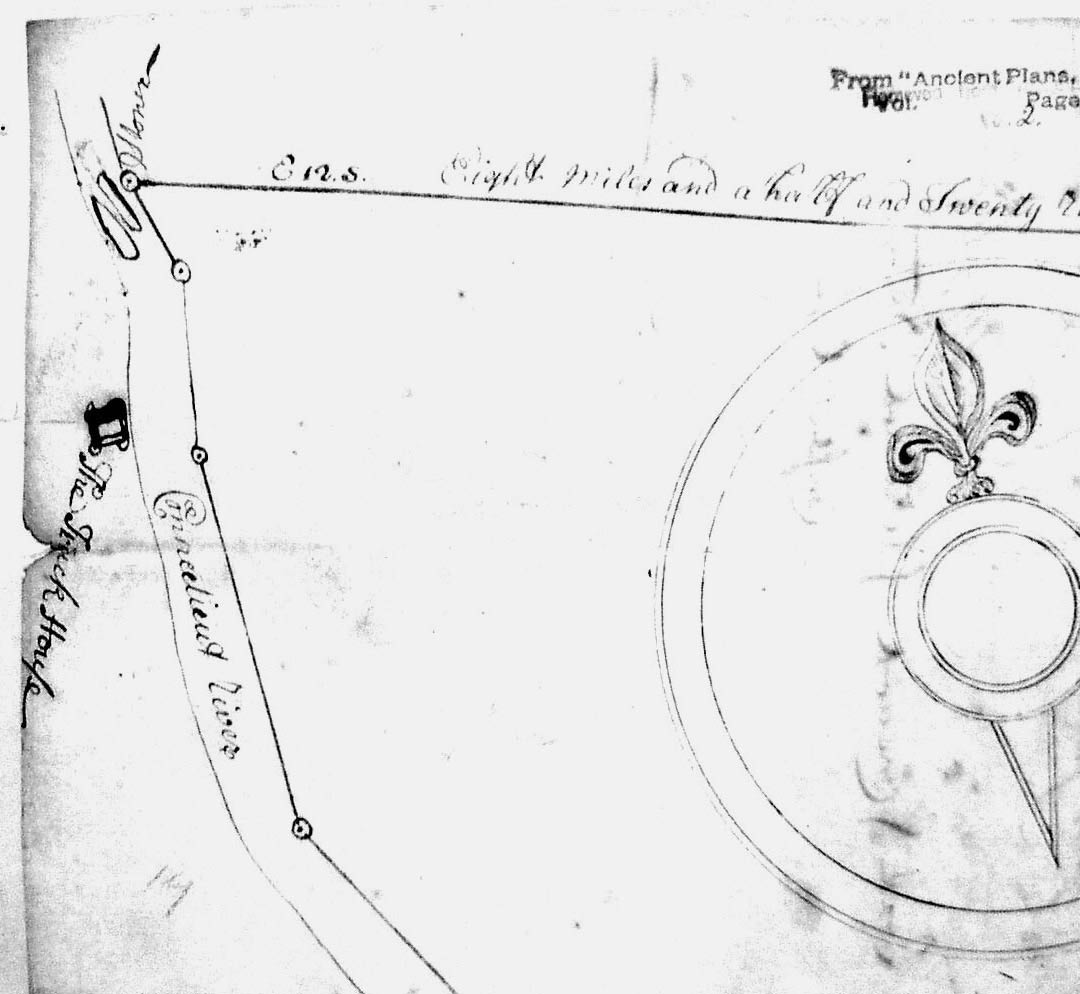 The early pioneers chose the best land first – it would be a few more years until the Vermont lands would be claimed for townships. Winchester (then called Arlington) had an inverted “L” shape  which gave it access to both the Connecticut and Ashulelot Rivers.*

On the Winchester charter map, from the Massachusetts Archives, we see Fort Dummer, here labelled the “Truck House”. To “truck” was to trade.

Fort Dummer was a center of commercial activity as well as a fort. More details on Fort Dummer follow on the next page.

This old map also shows  the two large islands which existed until the mid 20th century, at the site of the modern bridge between Hinsdale and Brattleboro.

Other maps of these islands are on page 19. 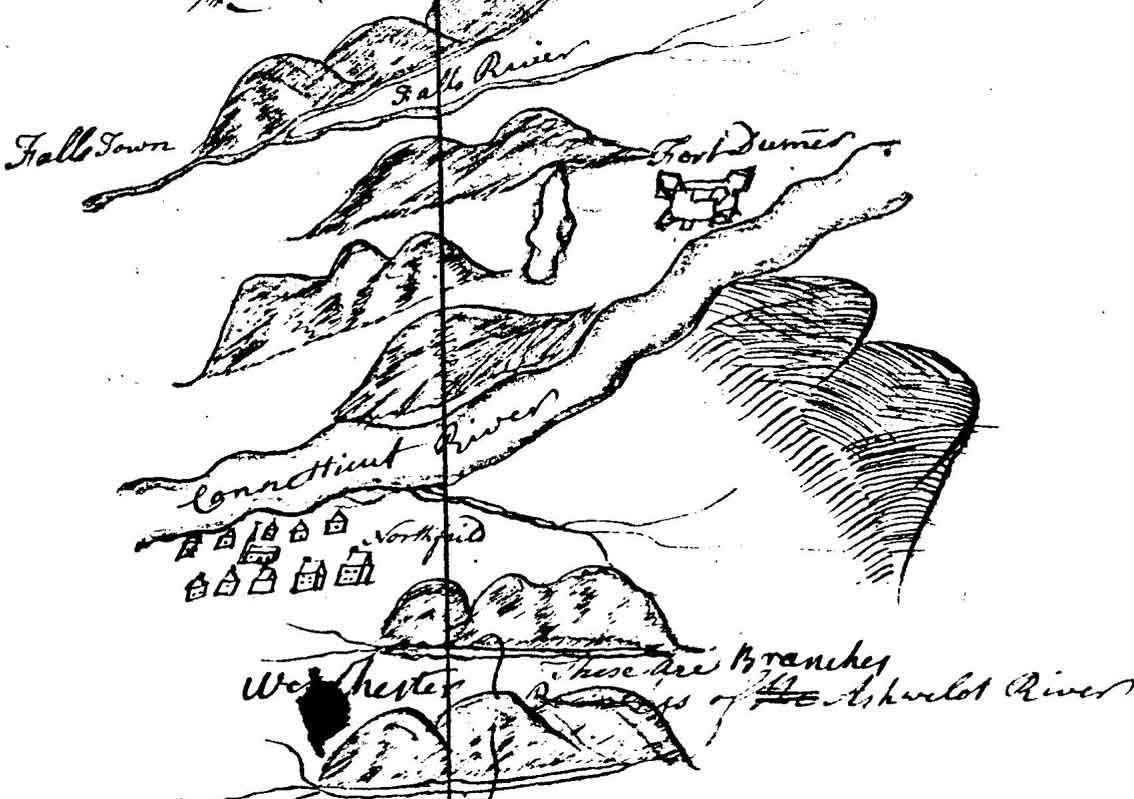 As noted earlier, the English King (George II) decided that the Massachusetts / New Hampshire boundary was to be an east-west line.

However, no one, including the King, knew where the line was on the ground.

Surveyor Richard Hazzen was sent out into the wilderness to actually survey the line in the winter of 1740-1741. Hazzen’s map shows all prominent features he and his survey crew found along the way, including Fort Dummer.

It is not clear whether Hazzen went to the fort.  He spent the night at Northfield, the substantial settlement depicted here below the fort.

In his diary for April 6th, 1741, he reports that he crossed the Connecticut “with great difficulty…in a canoe…” and ascended a high hill from which he had “a fair view of Fort Dummer…”

The fort was built in the winter of 1724 on a tight schedule.

Open hostilities with the Indians (sometimes called “Father Rasle’s War”) had begun the summer before, including an attack on Northfield.

The Massachusetts legislature voted on December 27, 1723  “…to build a Block House above Northfield in the most convenient place on the lands called the Equivalent Lands… .“ A few weeks later Colonel John Stoddard, the regional commander, wrote a letter with his specifications for the fort, including this drawing (Map 5). Stoddard’s plan for Fort Dummer shows a square building with four “Mounts” – raised towers from which soldiers could see the approaching enemy. 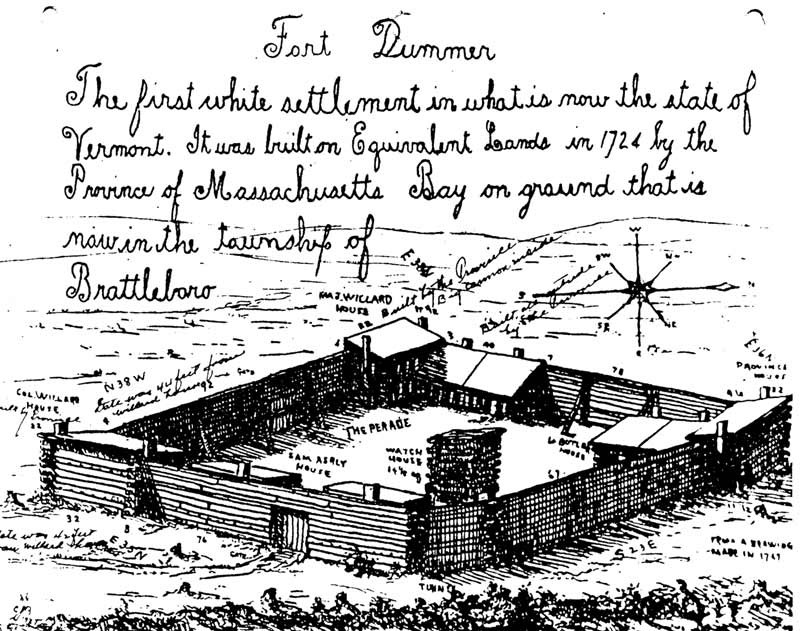 Within the first year there was a conflict.  Three or four men are supposed to have been killed on October 11 of 1724 when about 70 Indians attacked the fort. That was the only known fight at Fort Dummer itself.  For the next few years the fort was used as an outpost for scouting parties.

The location opposite Wantastiquet Mountain was well chosen.*  One old letter reports that scouts were “…sent up ye West River Mountain to lodge on ye top and view Evening and Morning for smoak…”

A period of peace began in the late 1720s, and the military garrison became a base for trade with the Indians. In June of 1728, Massachusetts appropriated a large sum of money for goods “…to be lodged at the Truck-house above Northfield to supply the Indians withal.” Some soldiers had their families with them, notably Captain Timothy Dwight, whose wife, Experience King Dwight, gave birth to a child at Fort Dummer in May of 1726. This child, also Timothy, became the father of the future Yale president, and is supposed to have been the first English child born in Vermont.

Published histories are not clear on the matter, but it appears that several other familes, including children, lived at the fort during this early period. For 10-15 years there seems to have been relative peace near the fort, in fact a peace treaty was agreed to at the fort in 1736 between some of the Indians and the Province of Massachusetts. 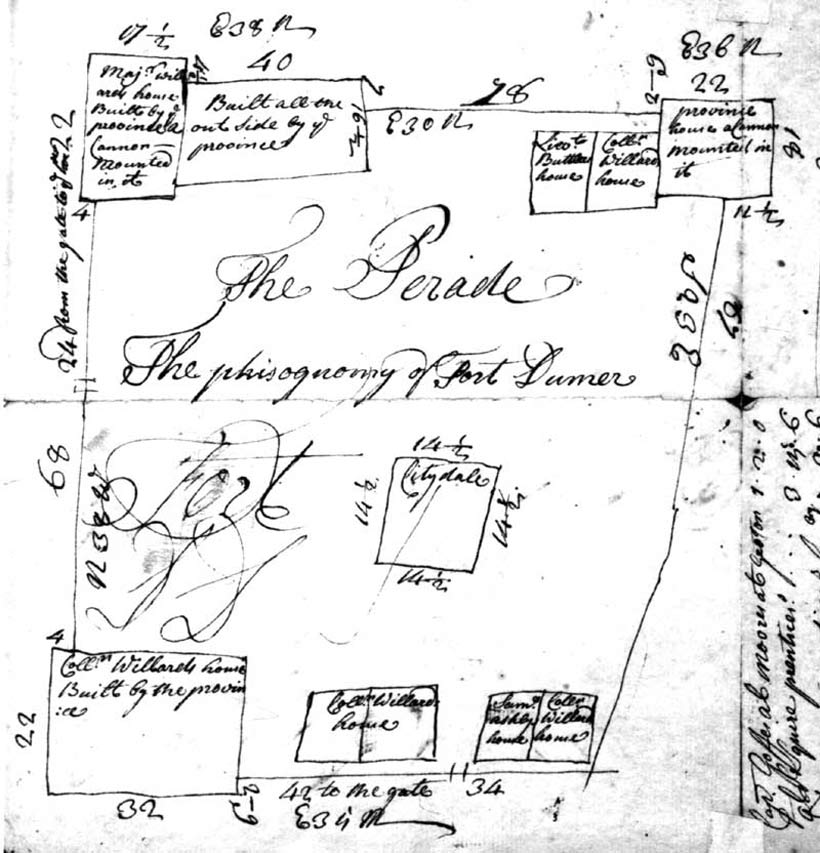 By the mid 1740s there were more settlers in the area.   The Ashuelot Valley towns such as Keene and Winchester each had a few families, as did Putney and Westminster along the Connecticut. This decade was difficult for Fort Dummer and for the nearby settlers.

War broke out in 1744 betwen France and England and conflicts soon spread to the Brattleboro area.  From that time until the end of the decade there were numerous armed skirmishes, several resulting in deaths. The fort was not attacked, but soldiers from Fort Dummer died on scouting missions, as did settlers in nearby towns. It was so dangerous that most of the nearby settlements were abandoned for a few years.

During this period before Vermont was established, the “Equivalent Lands” and Fort Dummer were in New Hampshire, but maintenance costs and staffing were paid  by Massachusetts.

The Province of New Hampshire – whose nearest population centers were many miles to the east over difficult routes – did not feel it should pay for a fort which protected mostly Massachussetts people in the Connecticut River valley. However, King George finally ordered New Hampshire to pay for upkeep and in 1749 New Hampshire sent surveyors out to make a map and gather some other facts about the fort. 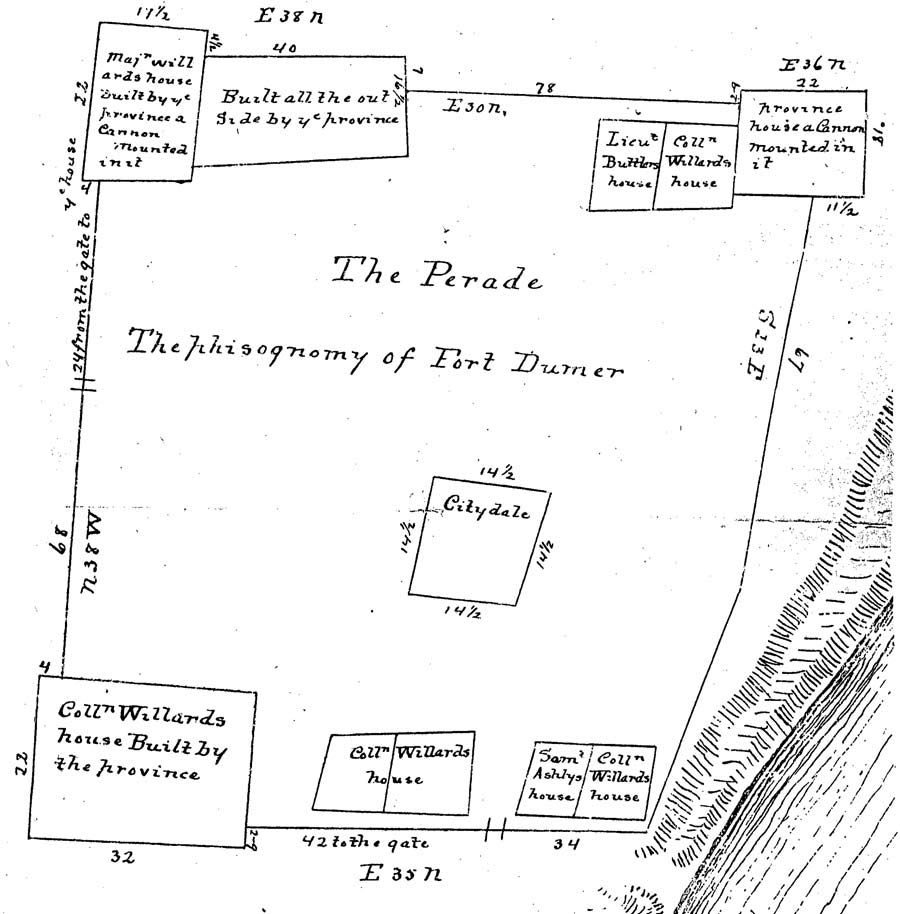 A copy of the original 1749 map is reproduced here, along with a circa 1891 tracing which is a bit easier to read, and which shows the fort’s relationship with the river.  This is the only known map of the fort as it was built.*

In addition to this map, the surveyors provided a written description of some of the fort’s construction details. Those notes are included on the CDROM version of this book.

The site of the fort, now under water, is presumed to have been eroded away. In 1976, during a temporary lowering of the river for dam repairs, a limited archeological dig was conducted on the site. The dig resulted in a number of artifacts and the confirmation that most of the fort site was probably lost to history.