This simple manuscript map is an important document in the history of southwestern New Hampshire. It is the earliest known road map of the area, and is the map upon which the establishment of county government was based. 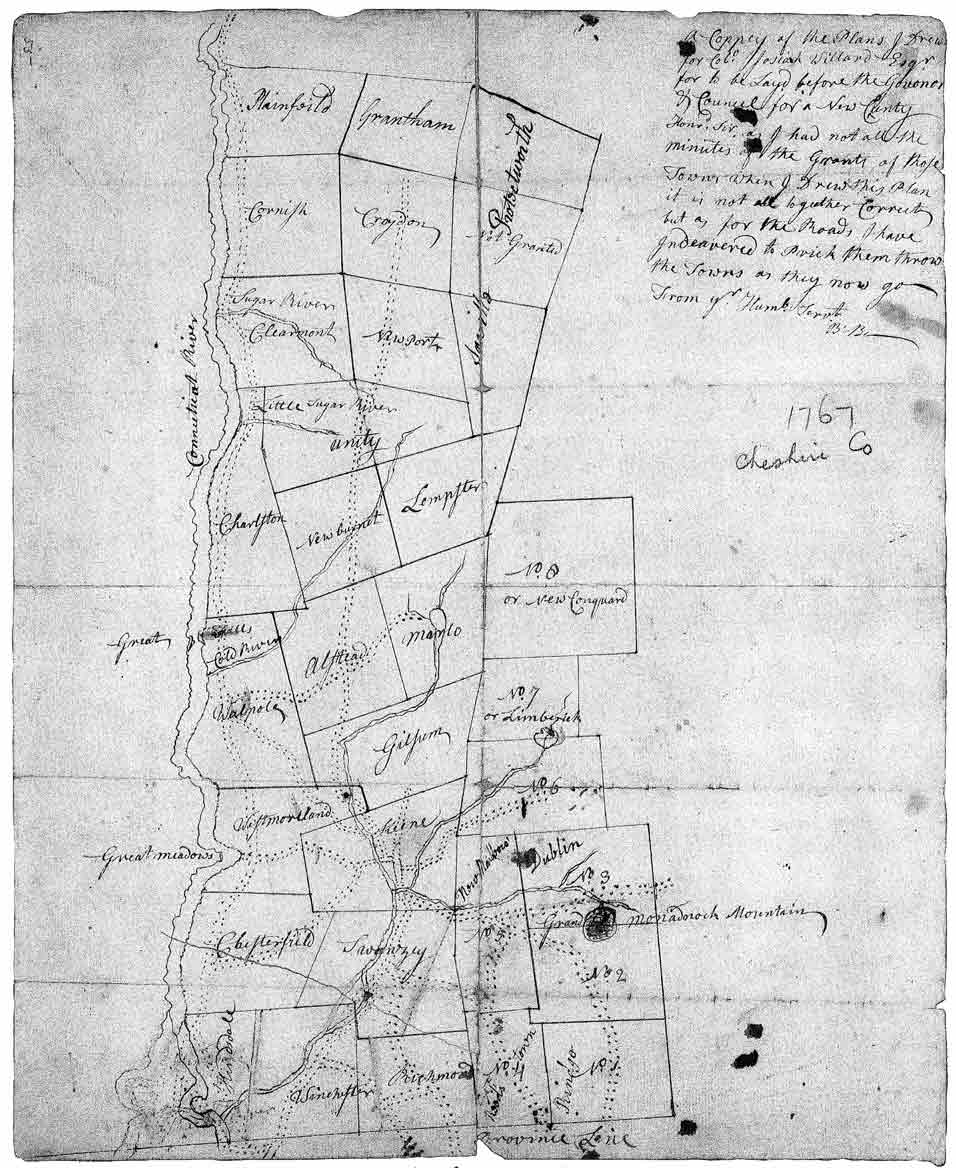 The original map is at the New Hampshire State Library in Concord. The author, who signed the map “B. B. . …., was probably Benjamin Bellows, a prominent landowner and surveyor. The map’s purpose was to show the several towns which desired to be organized into a county. It may have accompanied the 1767 petition to Provincial authorities which formally requested such an arrangement. In 1771, county jurisdiction was established, and this group of towns, extending from Hinsdale to Plainfield, was declared to be Cheshire County. (These towns comprised a larger Cheshire County than we recognize today. In 1827 they were formed into the present two counties of Cheshire and Sullivan.) The author’s handwritten note, important to the map’s understanding, is transcribed here:
========  insert quote here =======================

With these words the author reports his uncertainty about the town boundaries shown on his map and states his greater confidence in the road layouts. His opening words, “A Coppey of the Plans I Drew … “ , suggest that this map is a tracing. Hand drawn maps of this era were often copied, and sometimes survive only in such a form.

Note the several roads leading into the county from the south. Along these roads came the great numbers of people who arrived here in this decade of growth. Keene had more roads than any other town; indeed, in 1767, Keene was the most populous town, with 430 residents. Only one short road is seen in the least populated town, Marlow, where 77 people lived, and none in Stoddard, which was not settled until 1768. The two north-south roads extending the length of the map serve the same travel needs (though they don’t follow the exact routes) of the present River Road and Route 10. In 1767, the main route between Keene and Newport went through Alstead. Today, Route 10 passes through Marlow on its way north. The roads on this map are the main roads of 1767; it is likely that other less heavily traveled roadways also existed.

On this map we see several new names for towns. Boyle, Addison and Newtown are now Gilsum, Marlow, and Alstead. Some town names have changed more than once. Stoddard is shown here as “No. 7 or Limberick” (sic). No. 7 was its granted name, but it became known as Limerick at about the time the map was drawn. The name Stoddard did not come into use until 1774. In the lower right corner of the map, one finds interesting evidence regarding town name changes. Four of the Monadnock townships have had names added, apparently after the map was drafted. Reedstown,” for example, is written next to No. 4, but in a different hand than that of the map’s author. Named after pioneer settler John Reed in 1769, it became Fitzwilliam four years later, in 1773. Above No. 4 is the town that later was divided to form Marlborough and Troy. Monadnock No. 5 was called New Marlborough for a time, named by the citizens of Marlborough, Massachusetts who settled it beginning in the mid-1760s.

It is noteworthy that Hinsdale now occupies only the east side of the Connecticut River. The claim by New Hampshire that it owned the territory west of the river was disallowed in a 1764 decision by the King, who declared that the lands belonged to New York. Years later, Hinsdale’s west bank became Vernon, Vermont.